In the first article on linear regression I promised to show how to do it better, so this post will be about truly scientific approach to the problem. Don’t worry if you don’t get it off hand. Honestly speaking it took some time for me to figure out what’s going on and even now from time to time I take some paper and draw matrices/vectors to be sure I’m doing everything right.

and you need to find sum of $ x_{n}^{2} $. I understand that it’s trivial and synthetic example, but later all these over-complications will come handy.

First that that came in mind is just to make iteration over $ x_n $ and accumulate values like below.

but that’s too easy and not cool at all. We’re going to use the power of linear algebra here. Fortunately I took linear algebra class in the university and it’s good time to resurrect the knowledge and give it a chance. Matrix multiplication works well here.

Code for partial derivatives of $ J(\theta) $ function can be also vectorized. It was a brain teaser to write all $ \theta_j $ update in one step but when it’s done it seems really obvious.

And that’s really it. We have our function parameters updated in one step. There are lots of advantages of the vectorized implementation. You don’t need to bother with all those for loops when you have $ X $ with multiple features (here we have just one, but in next posts we will deal with multiple features and polynomial regression). Second as all calculations are rarely done by hand, more often by some libraries such as numpy in python, they will be faster because all libraries are highly optimized and use operations parallelism, thus vectorized approach will run much faster.

And below is the code for the vectorized implementation.

Since function the same as in the first post, I won’t show it here. Instead let’s look at gradient work. We will see how cost function $ J(\theta) $ is getting lower and lower with each step of gradient descent. 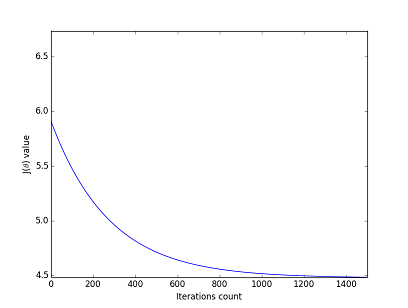