Okay. This is going to be another article about GitHub pages, Jekyll and how to start blogging using theese cool tools. There are plenty of manuals about the topic, but since I’m windows user and spent some time trying to set up everything I’m going to describe the process from the very beginning.

First of all you need to create a site using GitHub pages. Go to the http://github.com and create new repository named USERNAME.github.io 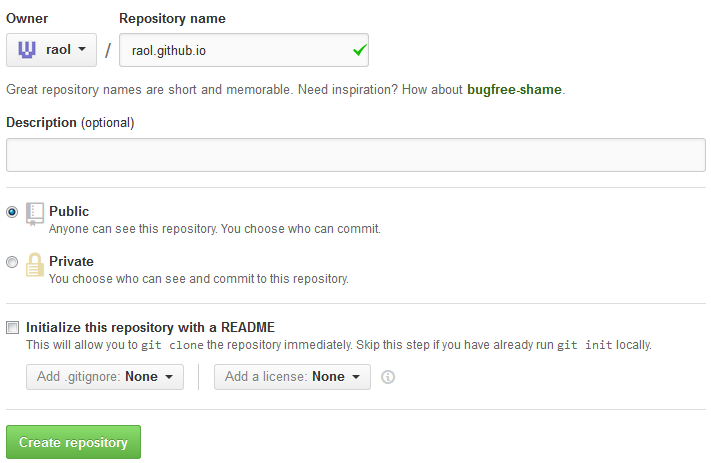 Then you can either wait for about a 10 minutes and try to visit http://USERNAME.github.io to verify that pages website exists or continue set up while pages are being created.

And that’s it. Now you’re ready to publish anywhere you want and it will be displayed at your homepage. But blogging this way is hard. So the next step you to do is to configure blog engine make things a bit easier.

Go to http://rubyinstaller.org/ and download RubyInstaller 1.9.3 (for now) version. It worked for me. Don’t know whether there is jekyll for 2.* ruby version, and didn’t want to bother thus decided to go on 1.9.3.

Do not install Ruby to the Program Files folder or any one containing spaces. It’s better to use location suggested by default.

Jekyll is simple static site generator. It does all the magic. So you can write your bloh post in Markdown and then Jekyll transforms them to the static HTML To install Jekyll open run gem install jekyll command.

You might face problem with fast-stemmer during jekyll installation. I’ve fixed it by installing Ruby Development Kit. Extract it either to default location or in Ruby folder. Target folder should not contain any whitespaces.

And again there might be an error like mkdir: Invalid argument. In this case jekyll needs to be reinstalled to the 1.4.2 version

After that everyhting shoudl be fine and Jekyll shoudl start normally. So run again jekyll serve and open http://localhost:4000 to verify that everything is ok.

Now you’re done and can create your first blog post.